In the following posts we explain the usage of Wipbi, and we start by explaining its most important functionality: how to create a new project and upload new reports, to create the dashboard with project health metrics.

At the moment of writing this post, Wipbi has been tested with MS Project native files and XML interchange files exported from GanttProject and OpenProj.

The basic underlying concept of Wipbi is as follows: Wipbi expects the project manager  to upload weekly (or every two weeks, monthly, etc.) a report containing the gained progress of the project in that period of time. So, first it is important to fill start and end dates properly, as it is not the same to have a certain progress at some time than having the same progress two weeks later.
To avoid errors, Wipbi will fill automatically the Start Date with the End Date of the last reported period, so updating the status means: “This is the gained progress in the last week, two weeks, month, etc.”. The first upload requires both dates to be filled. 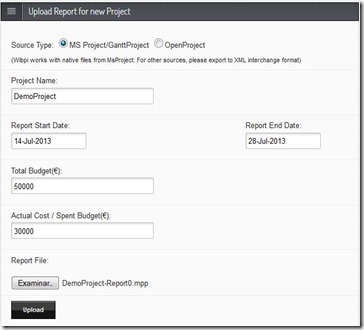 In order to simplify things in this first release, Wipbi is not getting costs from the project files. Instead, you can easily fill Total Budget of your project and how much you have spent at the time of reporting (Actual Cost). This two parameters will provide some Earned Value calculations.

After uploading, you get dashboard informing of the project status at some time, with some health metrics: 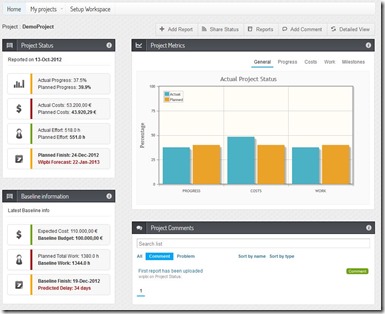 The dashboard is quickly informing of the following:
So, the Project Status box is informing about differences between the actual status and the planned status.

On the other hand, the Baseline information box shows deviations in plan respect to the last approved baseline. It is important to watch baseline deviations because it reflects what it has been contracted or accorded. Indicators will permanently be warning about this situation until a new report is uploaded and set up as new baseline, which means “Stakeholders agree that total work and costs will be higher, and that the project will finish 34 days later”.

In the next posts, we will explain the dashboard functionality, and how to get more detailed information of Wibpi internal calculations.
Posted by José A.M. Ontiveros at 12:26